ESC to Close, ENTER to Search

If this company owes you or if you have any concerns about being paid by this company, please feel free to contact us immediately at 1.662.268.9558

For the fastest assistance, regarding information for FMCSA is now deploying military drones to enforce ELD mandate provide us with some information and we will reach out.

FreightWaves has obtained exclusive video of the top-secret FMCSA drone enforcement program called “Pigs in Space.” Modeled after the Predator drone program that was the go-to-resource during President Obama’s War on Terror, the FMCSA has been collaborating on a project initially created by Senator Bernie Sanders (D-VT) to accelerate his War on Trucks. As stated during the election, Sanders intended to build out a high-speed rail program to “take trucks off the road.” Watch the footage of the FMCSA’s drone testing by Clicking this link:

When Sanders’ primary campaign went down in flames on Super Tuesday (March 1, 2016), Washington anti-truck forces grew more desperate. A shadowy cabal of railroad executives, environmentalists, and Department of Defense operators coalesced in the ‘deep state’ around a mission to enforce the ELD mandate by any means necessary.

A Department of Transportation employee who wished to remain anonymous, because they are unauthorized to speak to the press about the “Pigs in Space” project, told FreightWaves that early last year an FMCSA commissioner was heard expressing concern that the publicly disclosed April 1 “hard enforcement” policies did not go far enough. The federal bureaucrat reportedly fumed over owner-operators and small fleets who “haven’t been getting the message about our zero tolerance policy when it comes to hours-of-service violators.” Simply putting the hours of service terrorists out of commission was clearly not enough, the commissioner said, stating that safety regulators must consider eliminating the threats through force.

That’s when the new drone fleet was unveiled to the FMCSA brass. Each General Atomics MQ-1 Predator drone is equipped with two Hellfire missiles, which can be used against trucks suspected of violating hours-of-service.

According to sources, the moment a driver runs out of hours and continues to drive, a command center deep in the Nevada desert receives a notification from the ELD. Drones hovering high above the interstate highway system day and night are suddenly taken off standby mode and piloted remotely toward the H.O.S. violator. The ELD’s GPS pings help guide the drones to their targets, and the driver receives no advance warning of an incoming missile.

FreightWaves expects massive supply chain disruptions in the United States beginning on April 1st as thousands of exploding trucks clog the roadways. Clearing debris and repairing craters from missile impacts from the first wave of ‘enforcement’ could take weeks, prolonging freight delays. We expect spot rates to skyrocket–while rockets fly through the sky–as shippers struggle to find carriers willing to move their loads through a war-torn landscape patrolled by flying robotic assassins.

Turndowns–tendered loads that have been rejected as a percentage of total loads–should also spike as truck drivers abandon contracted freight and cower under overpasses, waiting out the FMCSA’s missile fire. Tender lead times, the difference between the date a shipper tenders a load and the date when the shipper wants it picked up, should extend to infinity. Tender lead times indicate shippers’ perception of market volatility, and as waves of drones relentlessly eliminate HOS violators, shippers will post loads further and further in advance, desperate to find a brave driver willing to risk his or her life.

Needless to say, the FMCSA’s latest heavy-handed enforcement tactic is expected to exacerbate the driver shortage. We can only hope that the traumatized survivors of the April 1 ‘hard enforcement’ apocalypse are finally able to negotiate the rates they deserve.

There is hope for tech-savvy truckers, though. FreightWaves has learned of new digital apps that offer real-time tracking of FMCSA drone activity and push alerts to drivers’ smartphones every time a missile launch is detected. The app then offers route guidance to help drivers avoid explosions and road closures due to FMCSA missile fire.

Other products may help truck drivers foil the regulators’ drone strikes: FreightWaves has seen demonstrations of large asphalt-colored decals that can be applied to a trailer’s roof, making the trailer blend in with the road surface. Special reflective paints are also being marketed to truck drivers which refract and scramble the LiDAR beams used by the drones to navigate their environment and identify targets.

Please remember, our service is risk-free. If we can’t collect, you owe us nothing even if we file suit on your behalf. The only time we get paid is when you do.

If funds are owed you by a company not on our list, or if you have any concerns about being paid by a company on this list, please feel free to contact me immediately 1.662.268.9558

I hope you enjoy the Search Enhancements to Freight Broker Alert to better help our users to stay informed by minimizing your company’s protentional exposure of non-payment of freight charges to your company. 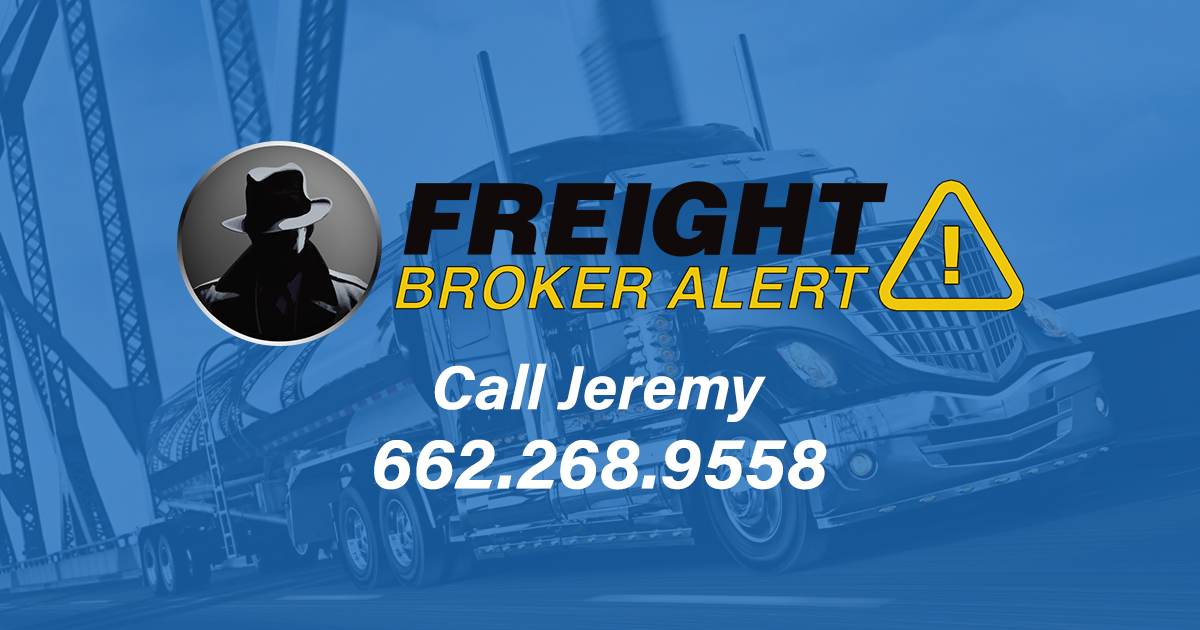 If you are owed money or need information about a certain company, please contact us.

View a full list of all debtors in Illinois.

View a full list of all debtors in California.

View a full list of all debtors in Florida.

View a full list of all debtors in Texas.

How can I help you today? You can use the links below to help assist you.

You can search by company name, shipper name, MC#, or USDOT#.

If you have questions or wish to inquire about an alert, contact us today!